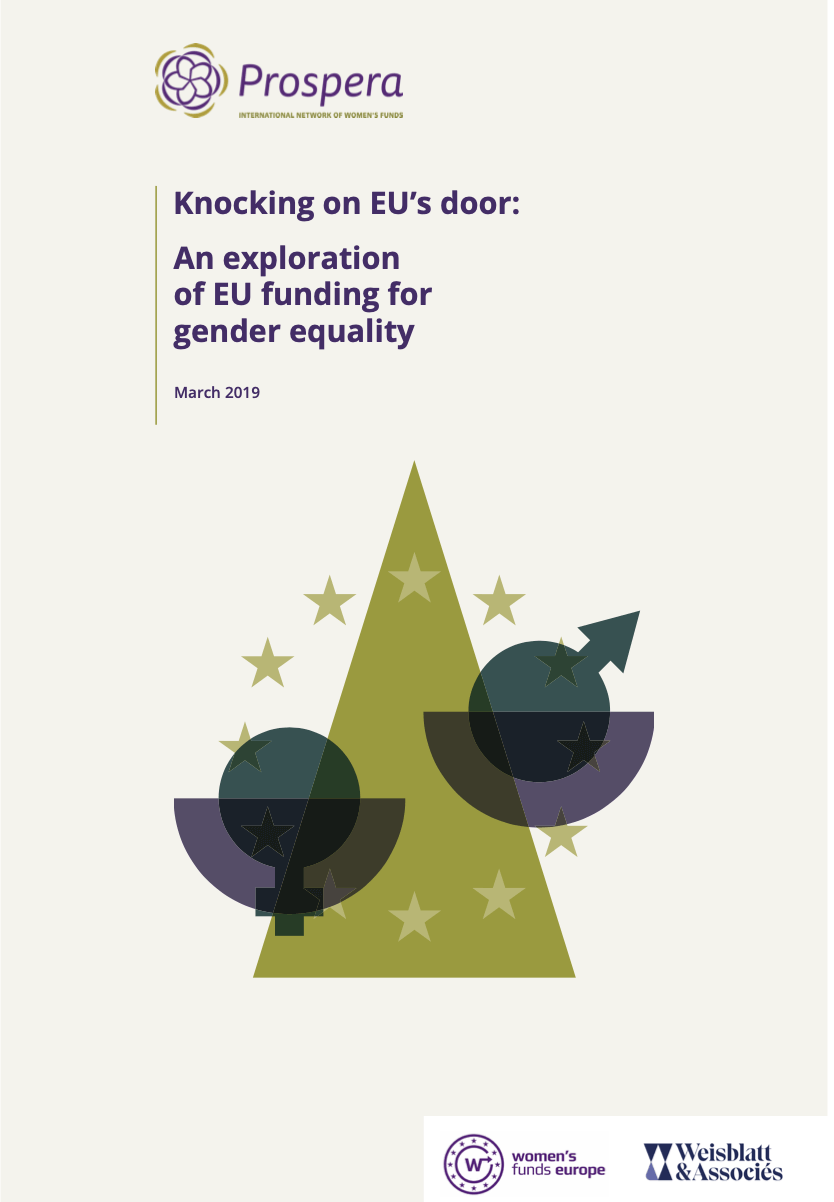 In 2016, members of the Prospera International Network came together to create “Women’s Funds Europe” (WFE), a loosely- structured coalition of 12 women’s funds from 10 countries. Collectively, it launched “Knocking on EU’s Door,” an initiative centred on building capacity to engage with and influence European grantmakers.

In order to gain deeper knowledge about the European Commission funding process and how best to organise effective advocacy for more funding, WFE commissioned Weisblatt & Associés to write and produce the report, Knocking on EU’s Door: An Exploration of EU Funding for Gender Equality. This publication examines how much money is available at the EU-level for gender equality, who benefits from it, and how women’s funds can increase their share in the future.

The European Commission’s Strategic Engagement for Gender Equality 2016-2019 earmarked over six billion euros for programmes that include a gender equality objective and use gender equality indicators. Despite these financial efforts, the overall picture of funding for gender equality at the European Union (EU) level is mixed. While there have been many positive initiatives, there is still much to be done. In particular, funding needs to focus on organisations best positioned to advance the goals of gender equality. And even if it seems uncontested that women’s funds or women-led organisations are among the most qualified to work on these issues, this has not translated into gaining substantial institutional support. Furthermore, concrete data needs to be made accessible to the public.

According to a 2018 European Parliament report, more than 9 in 10 Europeans think that promoting gender equality is important to ensure a fair and democratic society.[i] But true advancement in this area “requires a change of mind-sets, solidarity and the political will to create institutional and legal frameworks that specifically address gender inequalities,” the report emphasised.[ii]

In highlighting the current status of financial flows to this area, as well as the challenges facing women’s funds, this report can be used as an advocacy tool as well as a resource to help guide strategic thinking for foundations, think tanks and NGOs to further develop the field.

Since August 2019, Women’s Funds Europe (WFE), has held extensive discussions with the main EU Institutions (European Commission, European Parliament and European Council) on key focus areas for policy and funding for women’s empowerment and the advancement of women’s rights.

WFE has worked closely with the main Units in DG Justice and DG International Development and Cooperation (Governance, Democracy, Human Rights and Gender) responsible for women’s rights organisations and civil society organisations in the European Commission to identify policy and funding routes for women’s funds globally.  Engagement is currently taking place at the highest level with the special advisers to the European Commissioner for Equality and International Partnerships, the Chair and Members of the FEMM Committee of the European Parliament and relevant pan European and global agencies (European Institute of Gender Equality and UN Women), to validate the approach and shape funding priorities in the next seven year European budget beginning in 2021.

RWF wishes you many care-free coffees in 2021!

Donate and support our joint programs!

OUR PROGRAMS LATEST DONATE OUR FRIENDS ABOUT US T&C